In my last post, I mentioned I was a bit stuck again. Well, two weeks on, I’m still a bit stuck, although I have made some progress. I'm sure this isn't an insurmountable 'stuck', but there are so many distractions at the moment!

The last couple of weeks have been quite busy with teaching-related work. I'm supervising some MA students, so there's been a lot of reading before tutorials as well as the usual preparation for my weekly class, and some extra work preparing for a one-day class, which I taught alongside my friend and fellow author James Russell. I'm really enjoying the co-tutoring, and it's making life a little easier for me. The one-day class went off very well – we had lovely feedback from students and came away buzzing.

A few days ago, I did an Off-The-Shelf event with four other authors, talking about our experience of writing MAs and what they can lead to. We were a bit worried about the turnout because, not only did the printed brochure list the wrong venue, but it was pouring with rain and there was other good stuff on the same night. At 7.30, there was just one audience member and the pub cat. As we filed into the room, the cat turned to look at us, then stalked off, tail flicking. I'm not sure what he was expecting! But then people began to drift in, having been redirected from the other venue, and by 7.45 most of the seats were full. It turned into a really good evening, with lots of questions from a lovely, lively audience.

To celebrate the success of the evening, we had a few drinks afterwards. Well, you do, don't you? This resulted in me managing to leave a rucksack with five copies of The Secrets We Left Behind, and one of The Things We Never Said in the pub or the taxi home – not sure which. I was certain that when I phoned the pub and taxi firm, someone would have handed in the bag, after all, who'd want five copies of the same book? But no, five days on, and they still haven't turned up. I'm just hoping I don't see them chucked on a skip somewhere...

So, that's a roundup of recent distractions (not including emails,domestic duties etc). The little progress I have made may be due to the discovery that my favourite coffee shop offers hot drinks for a pound before 10am on weekdays. So almost every morning, I've been heading over there as soon as I've walked the dog, and it makes me feel like I'm going to work. I usually manage a couple of hours most days, so even if I don't write anything else for the rest the day, at least I've done something.

I often go walking when I'm trying to solve a problem with my novel, but everything is so gorgeous at the moment that even that is distracting. Sunny silvery mornings and golden afternoons; crunchy leaves and conkers underfoot; sycamore helicopters spinning through the air all around you; isn't autumn the most beautiful season? Here's one of my daily walks: 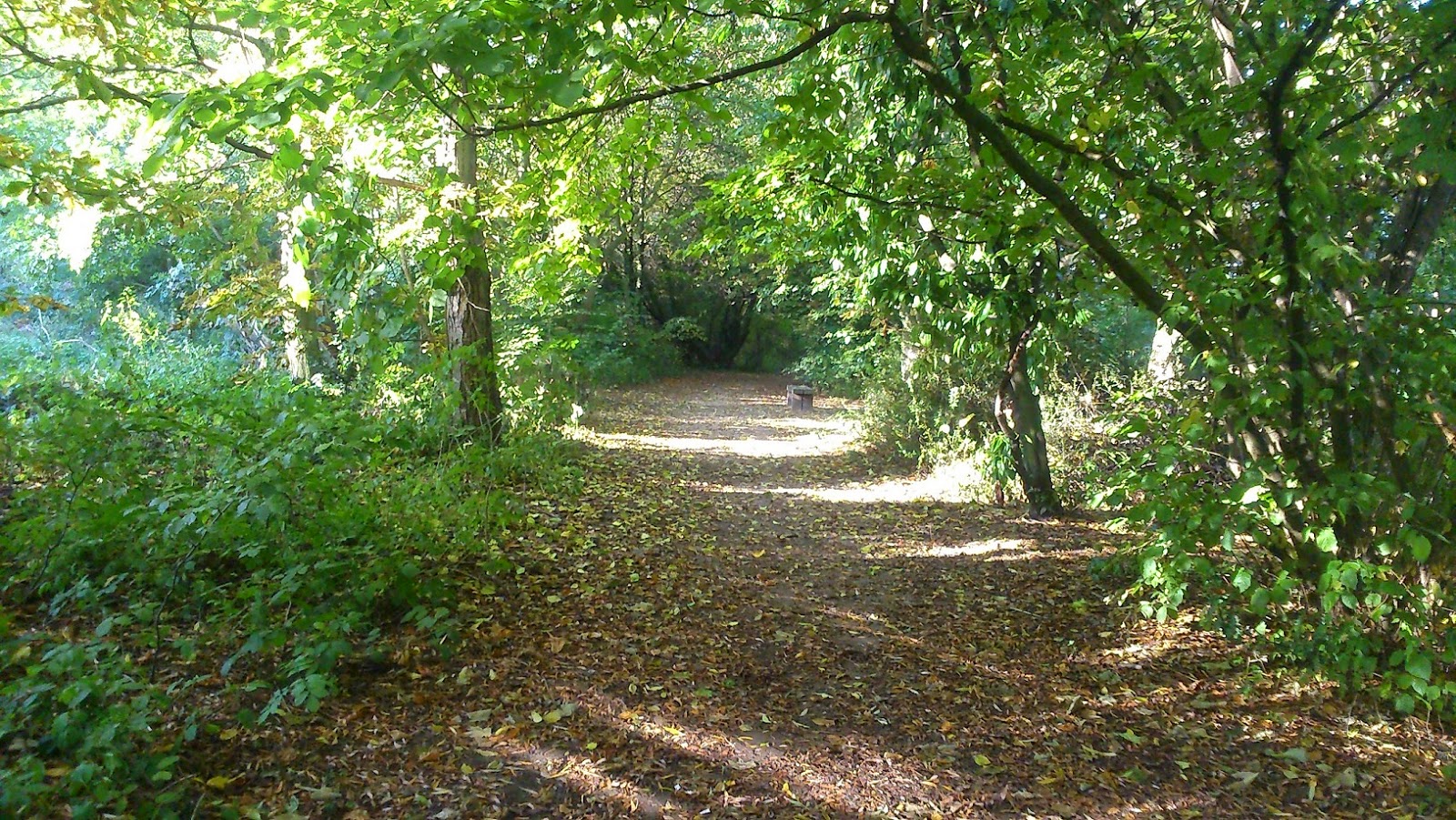 I met with my writer's group this week and got some encouraging feedback on my work. The main criticism was that the scenes needed trimming. I'm not doing much editing until I get to the end of this draft, but given that I'm stuck at the moment, I really enjoyed spending some time trimming/editing these sections. I always overwrite, and it's one of the things I often pick up on in the work of others. I think we all do it to a certain extent, and you really need fresh eyes to spot it.

I've not worked on the novel at all over the weekend, but I've done writerly things, including going to an event where three crime writers talked about their writing process, having lunch with a writer friend, and taking yesterday off to spend most of the day reading.

Coming up
Tomorrow (Tuesday 21st Oct) is the launch of Watch and Wait, a short story anthology to which I've contributed.If you're in Sheffield, do  pop along. Details here There will be readings, live music and general merriment - should be a great evening! Tickets available on the door, proceeds to the Lymphoma Association.

The next blog post will be on 3rd November, when I will have just returned from a three-day writing retreat here and will be about to set off on another one (this time for 4 days), here. So really, the next two blog posts should show considerable signs of progress!

Posted by Susan Elliot Wright at 15:06