29 June 2012
18:50
Hemingway once said, 'All first drafts are shit'.  Ernest, me old mate,  that is an understatement! I am referring, of course, to  my own current first-draft which at the moment is a steaming pile of merde if ever there was one.  I have to keep reminding myself that there were times when I felt the same about my first novel, but after a great deal of rewriting, I now think it's rather good, and so do Simon & Schuster, who are publishing it in May 2013. 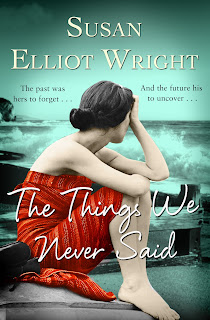 A novel has to start somewhere; it doesn't just appear in the right order with the storylines perfectly developed, the characters rounded and convincing, the themes consistent, relevant and thought-provoking.   You have to craft and hone and polish.  And most writers agree that most of the crafting and honing and polishing comes later - after you've written the first draft.

But it ain't easy, folks, so although I hope this post will encourage other authors who are currently wading through the mires of their own first drafts, it's also a bit of a pep talk to myself, because at the moment, I'm going through a very sticky patch. I'm changing things  -  I've changed the  period  the novel is set in and the occupation of the main character, I've changed the age of a supporting character, and I've introduced a new viewpoint. No doubt there will be a lot more changes. I'm also plagued by doubts - is the plot too thin? Will it be believable? Are my characters convincing? Will the whole thing work? Will anybody give a flying feck?

The thing is, I know from past experience and from talking to other writers that it would be unusual not to be thinking like this at this stage. So I'm ploughing on and I hope to have a rough - very rough - first draft completed by mid-August. There! I've stated it publicly, so now I'll have to do it! Some people write a first draft in a few weeks, and I envy them. I take considerably longer. I started working seriously on this idea in December, so if I hit my August deadline, it will have taken me eight to nine months - and at least the same again for rewriting.

A couple of years ago, I attended a novel masterclass by award winning author Jill Dawson. Jill keeps a journal-type notebook for every novel, in which she records her thoughts about the novel and the writing process - she uses the notebook almost as a silent writing buddy, having 'conversations ' with it about the work as it progresses.  With her most recent novel, she confided, she'd got to the 40,000 word point and had decided it wasn't working, and what's more, couldn't be made to work. At the point of despair and on the verge of giving up, she decided to have a flick through notebooks from previous novels. She found that she had experienced the same excruciating doubts with every novel she'd ever written - including the orange-shortlisted ones - and very often at the 40,000 word point!

So what we need to do is to really get it into out heads that a first draft is little more than a rough sketch, and we fill in the colour and texture later. At this stage, even if you've done plenty of planning,  things will change along the way, so to a certain extent, you're still telling yourself the story. There will be inconsistencies, plot threads that lead nowhere, one-dimensional characters, rubbish dialogue, important scenes that are skimmed over, lengthy scenes that will end up being cut completely. There will probably be superfluous back story,  lots of 'telling' and info-dumping, and no real sign of a decent theme. Stephen King tells us not to even think about themes in the first draft, and I think that's good advice. The real themes may turn out to be different to what you expected, because your unconscious will have been working away on your behalf.

So no matter how dreadful your first draft seems now, just plough on.  Keep moving your story onwards, even if it feels mundane and clumsy, even if it goes off in directions you hadn't planned. Remember that it isn't set in stone  - a half-realised scene can be added to later; a digression that doesn't work can be cut. Just keep putting the words down! Some writers like to check their word counts each day; others prefer to write for a timed period, or to write to a particular point in the story. I'm a word-count person, and I like to have some sort of visual encouragement, something that shows my progress. I reckon my first draft should be about 90,000 words, so I took two jars, and counted out 90 glass pebbles into one of them and stood them on my desk. For every thousand words I write, I move a pebble from the 'to write' jar to the 'written' jar. 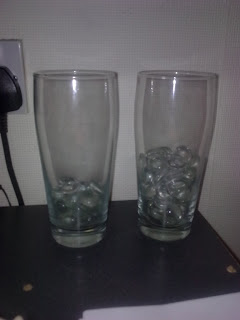 I'm happy to say that the jar on the right is the 'written' jar! It's a little bit of nonsense, of course, because many of these words will end up being cut, but I find it helps to spur me on.

When you get to the end of a first draft, it's time to celebrate - even if it's pretty poor - because now you have something to work on. Rewriting and editing will turn a poor first draft into an okay one, and an okay draft into a good one. From there, you're talking very good or even excellent. But if you don't have a draft, you have nothing.

Do you struggle with your first drafts, or do you find that the easy part? Are you able to ignore the flaws and keep writing, or do you edit as you go along? How long do your first drafts take, or does it vary?  I'd love to hear your experiences - perhaps we could cheer each other on?

For more about me and my work, visit www.susanelliotwright.co.uk

Posted by Susan Elliot Wright at 20:54