My autumn calendar is filling up with commitments ranging from the exciting and pleasurable, such as book club talks, literary festival events and running novel-writing workshops, to the less enjoyable – dental appointments, admin work, getting the car MOT'd etc. And with all this in the calendar, I'm finding it difficult to squeeze in my writing time.

But I wanted to keep you updated on my progress with the zero draft, particularly as I've been advising other writers on here and on Facebook to have a go at my method of using a visual stimulus as an incentive to get those words down.

I’m using two different stimuli to keep me going, one is purely visual – crosses on a calendar. This was an idea originally  posted by Mslexia magazine, though I’ve tweaked it for my own purposes. Basically, every day you get some words down, you put a cross on the calendar, the aim being to not break the chain. I’ve set  myself an absolute minimum of 200 with a target of 1000. (I’d find it too easy to interpret ‘some’ as five or six) and so far I haven’t broken the chain since I started on 7th July. 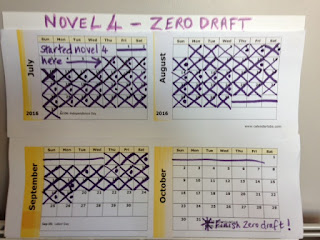 Each cross represents an absolute minimum of 200 words, and indeed some days, that’s all I manage. Mostly though, it’s somewhere between 500 and 700, and when I hit my target 1000, I put a dot inside the cross. As you can see, the dots have become fewer as I’m getting further on in the story. I’m hitting the odd plot problem that needs resolving now, and I’m slowing down while I try to imagine what my characters would do/think about/feel in the highly-charged emotional situations I’m putting them in.

But the longer this chain remains unbroken, the more determined I am not to break it. If I have to leave a naked, empty white space on this calendar before I reach the end of this draft (or the end of October – whichever is the sooner) I’m not sure what I’ll do. Having blabbed about this all over social media, I’ll be facing public humiliation at the very least!

The other stimulus I’m using is partly visual, and partly the promise of an actual, tangible reward.  I took two champagne glasses and filled one with 90 small coins (5p and 1p).  For each thousand words I add to the draft (crap words included – I’m doing very little editing at this point) I put a small coin back in my purse and add a pound coin to the other glass. 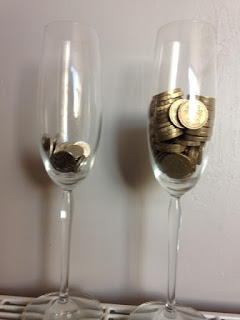 The zero draft is likely to come in at around 80,000 – 90,000 words, so that means I should have enough in that right hand glass for a nice bottle of bubbly and a meal out for Mr E W and myself - a reward for getting that difficult initial draft down, and to set me up for the process of writing a decent 'first' draft.

I may do something similar to get me through that first draft, but in the meantime, the stick (threat of an empty square on the calendar and public humiliation) and carrot (champers and something to line my stomach) idea seems to be working rather well. Current word count: 58,000.

Will check in again in a couple of weeks to let you know how it’s going.

Looking forward to running the Planning and Plotting workshop with Russ Thomas on Saturday. A couple of places left on this one, I think. Then we’re having a lovely Space to Write day on October the 8th before the next Writing a Novel Workshop (Bringing Your Characters to Life) on 22nd October.

Posted by Susan Elliot Wright at 11:22