The blog's a bit late this week because I only got back from my latest writing retreat (more below) yesterday evening. If you're new to this blog, I'm sharing the experience of writing my third novel. It's been a challenge! I submitted a crappy first draft in January – I'm calling that a 'zero draft', or draft 1.A so I'm referring to this one as draft 1.B. It's now two weeks to my deadline...

Anyway, it's been a brilliantly productive week. This is what I said at the end of last week's post:

So, my goal for next week: edit seven chapters, draft final two (or three) chapters.

How did I do? Mission accomplished! I ended up doing more editing than planned, because I ticked off those seven chapters, and then went back and did more tweaking and twiddling on a few others. Writing the final two chapters led to some changes I needed to make earlier in the novel, and there are still things I need to add in. I wasn't sure if it would be two or three chapters, but now I think it'll just be two, although I've also started drafting a short epilogue. Nothing detailed, just a brief sort of 'this is where they all are six months later'.

The other thing I've done this week is to move from working in Scrivener to working on a Word document. I compiled the draft in Scrivener, saved it in Word, and from now on, will be working entirely on that document. Spent ages this week checking the indentations, making sure the chapters are numbered and spaced correctly etc etc – boring stuff, but it has to be done.

One of the reasons I've managed to achieve and exceed my goal this week is that I spent a few days on a writing retreat. I've been here several times before and can highly recommend it. http://www.anniemckie.co.uk/ 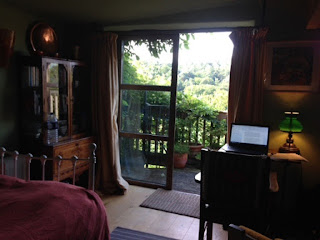 The wonderful host, Annie, who is also a writer so understands writers' needs perfectly, brings delicious, home-cooked meals to your room at agreed times so you don't have to think about anything but your writing. You get your own room with shower and loo and your own back door so you can come and go as you please (though I didn't even leave the room this time!) There's also a lovely balcony overlooking the Forest of Dean, so in fine weather, you can even sit outside and work. 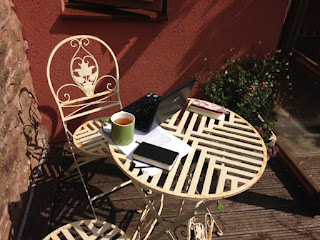 So, I got loads of work done, even though I lost half a day's work due to some ongoing stomach problems. Actually, I should warn you, next week's post may contain a bit of moaning and shameless requests for sympathy, because on Monday, which is my usual blog-writing day, I'm having a gastroscopy (camera down the throat and into the stomach). Had these twice before, and it's NOT my idea of a fun day out!

Anyway, let's not think about that (oh shit, now I'm thinking about that...)

Time to set a goal for next week: Edit my final two chapters, finish drafting the epilogue, and add in two little incidents I've come up with for earlier in the book. That's probably enough, given that I only have five days before I'll be posting again. Then I'll have a full week to read the manuscript and make any final alterations and corrections before submitting this draft.

Finally, I came back from the retreat to find my author copies of the Polish version of The Things We Never Said. The title is Przemilczenia, which Google translates as Silence, though there might be more nuance than that. I have three copies to give away if you read Polish, or have Polish friends who might fancy it. There are also three German copies going spare. The German version is called Ich Habe Dich Immer Geliebt, which translates as, I Have Always Loved You. 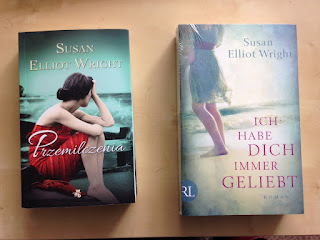 If you're in the UK and you'd like one of these, get in touch through the contact page of my website (the 'comments' facility on blogger isn't always reliable) with your name and address, and I'll post you a copy. First-come, first-served, obviously.

See you next week, when it's one week to deadline!

Posted by Susan Elliot Wright at 14:23