Last week, I posted the first blog in a series of 10 in which I share my writing process over 10 weeks with anyone who’s interested. Here’s week 2:

Tuesday, 1 July
Tuesday is when I publish this blog, so I spent some time last night and this morning tidying up the first post. I’m making notes as I go along, keeping a record of what I’ve done each day, but I still needed to write the introduction and do some editing. Once I’d published the first in the series, I went off to meet a friend for a coffee shop writing session. A fairly brief one today, because I’m teaching this evening and have students’ work to look at. Most of today’s writing was actually rewriting, but I clocked up another 658 words, even after deleting some. I’ve almost reached the point in the narrative where I need to jump forward in time, which will be tricky. On the plus side, as I was rewriting a scene I wrote ages ago, I realised I’d forgotten what happened next. When I read it, it actually made me gasp! Happy with that!  Word count: 658 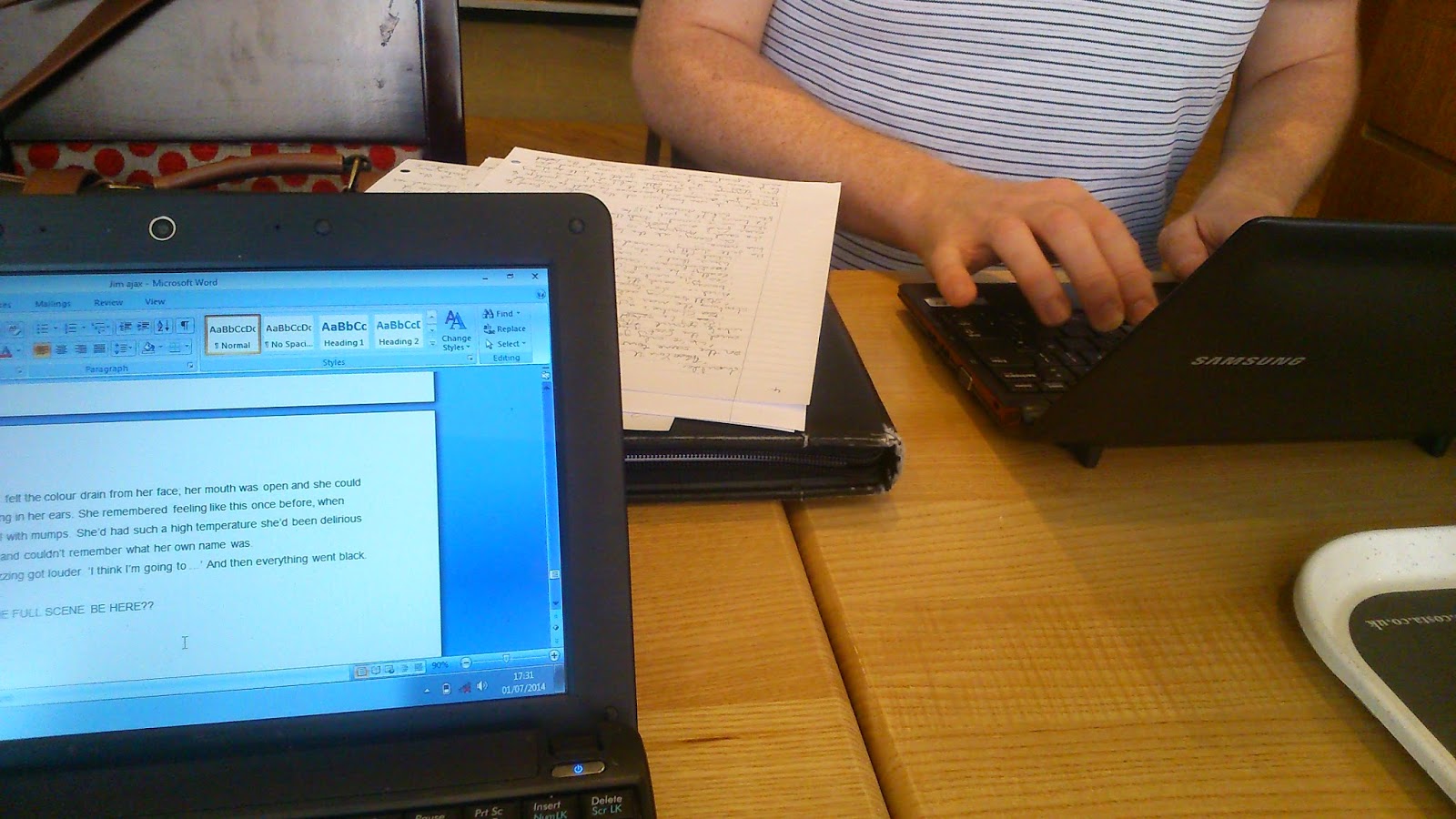 Wednesday, 2 July
Bitty day today - admin stuff in the morning, then an enjoyable half an hour so on Twitter before meeting friends for coffee and cake. Did some editing after lunch but didn’t really get into any new writing because I knew I’d have to stop at 3pm for babysitting. Did manage to do some reading, though. Just started We Are Called To Rise, by Laura McBride. I don’t feel too bad about not writing if I feel I am learning from what I read, although this book is so stunning, it just makes me think, why can’t I write like that?

Did a bit of background work today, too. This is a great tip: go through your notebooks and copy out those one-line notes or snippets such as: ‘A wears cufflinks’; ‘B has asthma’; ‘C reads A’s letters’ onto a separate card/piece of paper and chuck it in a shoebox. When redrafting, just take each card and when you’ve incorporated what’s on it, you can throw the note away. I found this really helpful with my second novel, especially as, when looking through notebooks a while after my first novel was published, I found loads of things I’d intended to include but had forgotten about.  Today's word count: 0 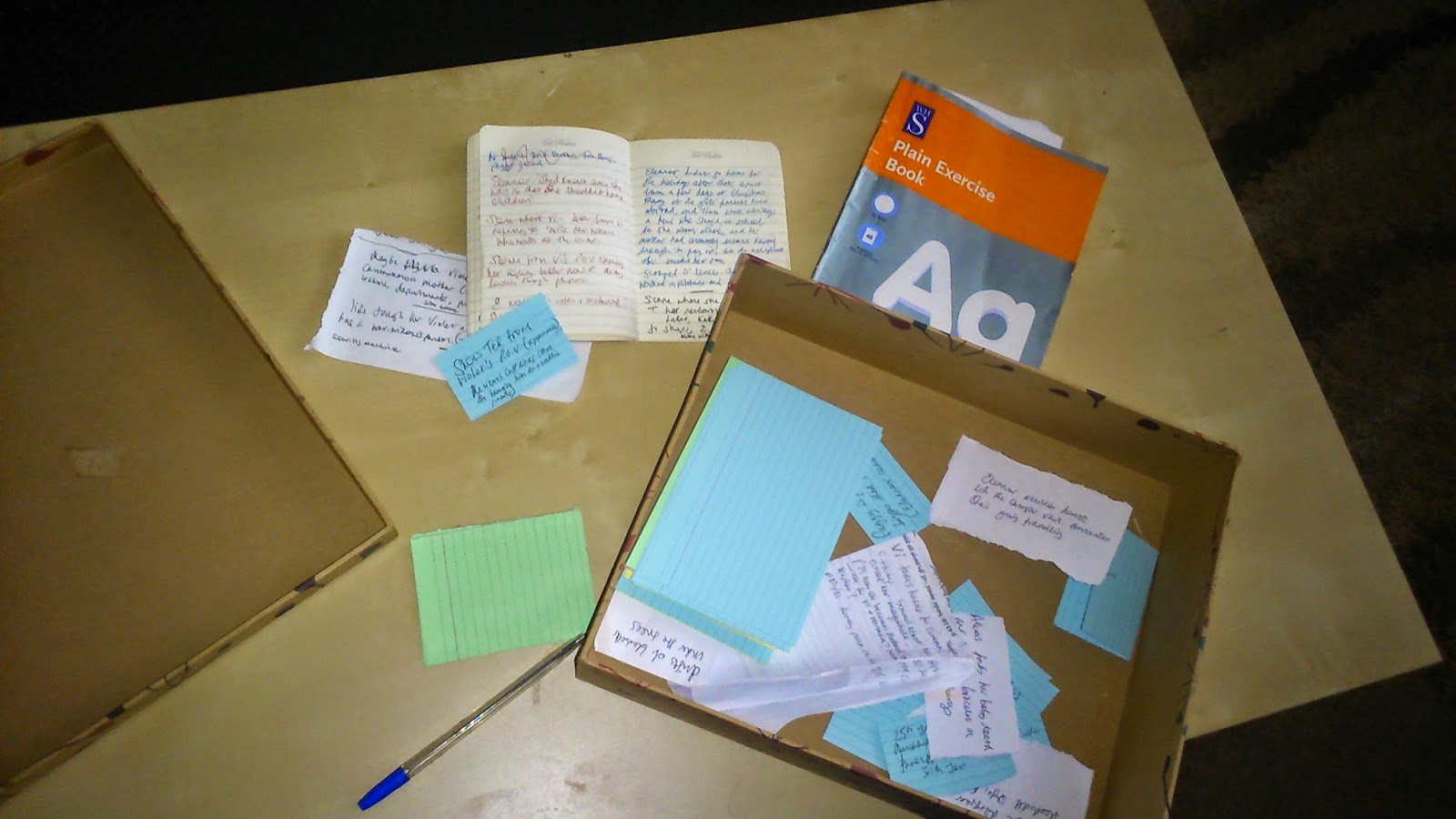 Thursday 3 July
Started with emails, Twitter, Facebook, etc. Read over the last scene I worked on – quite a dramatic one - and now realise I need to rewrite the next scene, too. I don’t usually do much rewriting until the first draft is complete, but in this case, I need to rewrite in order to be able to move on. Made a few cuts, then off to a coffee shop for a writing session with two friends. Fairly happy with the day’s work and could have carried on, but it was our book club tonight, so we closed our laptops and went off to the pub, all agreeing that the promise of a glass of wine at the end of the session was a great incentive. Word count: 1519; Glasses of wine: a few

Friday 4th July
Babysitting from 11am until 12 noon tomorrow. Squeezed out a few words before they arrived, then managed to do a bit of editing  while half watching Peppa Pig (it’s ever so good, you know!) but that just reduced the word count again. Still, at least I’ve done something.  Word count: 230

Saturday 5th July
Not much progress today. I’ve got to that point where I’m writing everything the characters do. Does that happen to you? It’s boring, and if I’m bored, the reader will be bored. I need to jump ahead in time, but I also need to know what happens to the characters during that period, and that’s why I'm stuck on a never-ending road. Stared at the screen for ages, then came to the conclusion that perhaps I should just write the next bit of the story in a boring  ‘tell-y’ sort of way (she did this, then she did that, then three years later, this happened and so on).  Might help me learn what happens to the characters in the ‘off-stage’ sections.  Feel very fed up. This is one of those days when the wine count exceeds the word count. Words: 0; Glasses of wine: 3

Sunday 6th July
Feel really stuck today, even when trying to put into place what I decided yesterday. One of my main characters is 15 now, and she and her mum are at a crisis point. I need to jump ahead about ten years, but I just don’t know what happens in those ten years. Went for a walk to think about it. Maybe I should just skip ahead and write scenes that’ll come later in the novel? Popped into a coffee shop, took out my notebook and began writing a very rough draft of a scene that might come later in the novel. Didn’t get very far with it, so word count for today: 360

Monday 7th July
It’s amazing how keeping a daily writing journal for the purposes of this blog can concentrate the mind. Did some editing this morning, then really got stuck in to a scene that comes ten years later. It’s very rough, and there’s a large chunk of ‘info-dumping’, but it has told me something about what may have happened during those ten years. I’m sure I’ll look at this scene tomorrow and decide it’s all dreadful. So maybe I shouldn’t look at it? Perhaps I’ll just try to move on… Word count 1023

Nice things this week:
Lovely email about The Secrets We Left Behind from a male reader. The first novel went down well with men, so I’m pleased this one is appealing to male readers, too.
New Amazon reviews this week:
The Secrets We Left Behind: No new ones this week, but some nice Twitter comments.
The Things We Never Said: one 3-star review and two 5-stars – particularly chuffed with this one (posted on Goodreads, too)

Overview:
I didn’t hit my target of 4000 words this week, but wasn’t too far off at 3790. Total word count now: 38, 213 (Didn't count how many words I deleted, but it would seem to be about 2000. Oh well...)
The coming week:
This is going to be a tough week: babysitting tomorrow (Tuesday), then my mother is visiting Wednesday-Saturday, then we’re staying with friends the Saturday-Sunday. My target this week is very modest – I simply want to make sure I do something on the novel every day. Aiming for maybe 2000 words as well.  Wish me luck!

Posted by Susan Elliot Wright at 22:12