MY WRITING WEEK, THREE OF 10

I'm writing a series of 10 blog posts in which I record my writing process and the progress I'm making on my third novel. This is week three. If you'd like to follow the whole thing, here's week one and here's week two

Tuesday 8th July
Babysitting again this morning from 8 until 1.30, then off to a meeting until 3.30, then reading students’ work for tonight’s short story tutorials. My aim for this week is to do something on the novel every day, but today has just disappeared. However, desperate to meet that modest aim, I managed to scrawl 150 words of a scene when I got back from class tonight. Too tired now to do any more, though, except to write up this entry for today. That’s the other thing I’m finding helpful about writing this blog – even if I’m not working on the novel, I’m committed to doing some writing every day so that I have a record to turn into a blog post at the end of the week. It’s also helping me to get a perspective on what I’m doing each day in terms of what holds up my writing and what helps it. For example, I’ve realised that when I have a commitment later in the day, I find it difficult to get started once it gets within a few hours of that commitment. The solution, obviously, is to start writing earlier! Word count:150

Wednesday 9th July
Spent an hour on Twitter  this morning – didn’t mean to, but there’s so much interesting stuff out there! Also, I felt compelled to tweet about the wonderful book I’ve just finished – We Are Called to Rise, by Laura McBride – highly recommended! Anyway, must work now - mother arriving in a few hours and then it's going to be difficult to get anything done. Today's word count: 520

Thursday 10th July
Look what arrived in the post today: 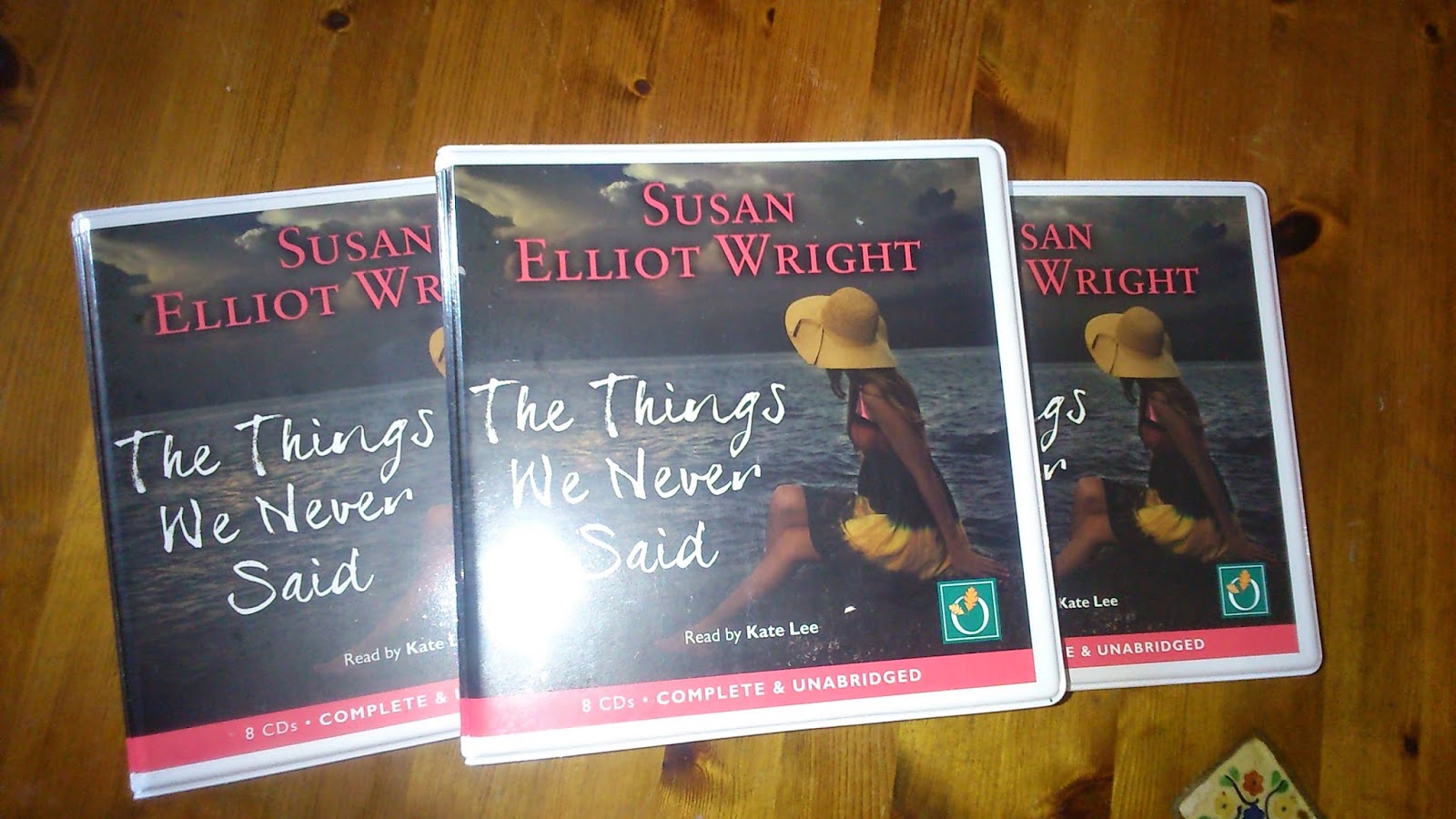 I'd like to keep one of these, but wasn't sure what to do with the other two copies, but after posting this on my FB page, I now have 'good cause' homes for two of them. My mum has arrived from London, staying until Saturday. Normally, I'd take a few days off while she’s here, but I'm really struggling with this novel and feel that I dare not take a day away from it. My line of thinking is that if do something on it every day, even if it's only reading over what I've written and doing a little editing, the story will be bubbling away in my subconscious and I’m more likely to find a way through. So, I’ve explained to mum that I need to work for an hour each day. I’m at the tail end of my hour now, but at least I've done something. Chipping away, chipping away...  Word count: 339

Friday 11th July
Again, I have snuck up to my study for an hour and have written a small chunk. It’s not going to set the world on fire, but it’s still moving forward. A good haul of research materials have now arrived and I'm really enjoying flicking through these - Woman's Realm and Woman's Weekly from the early 60s and mid-70s, and copies of Spare Rib from the early 80s. 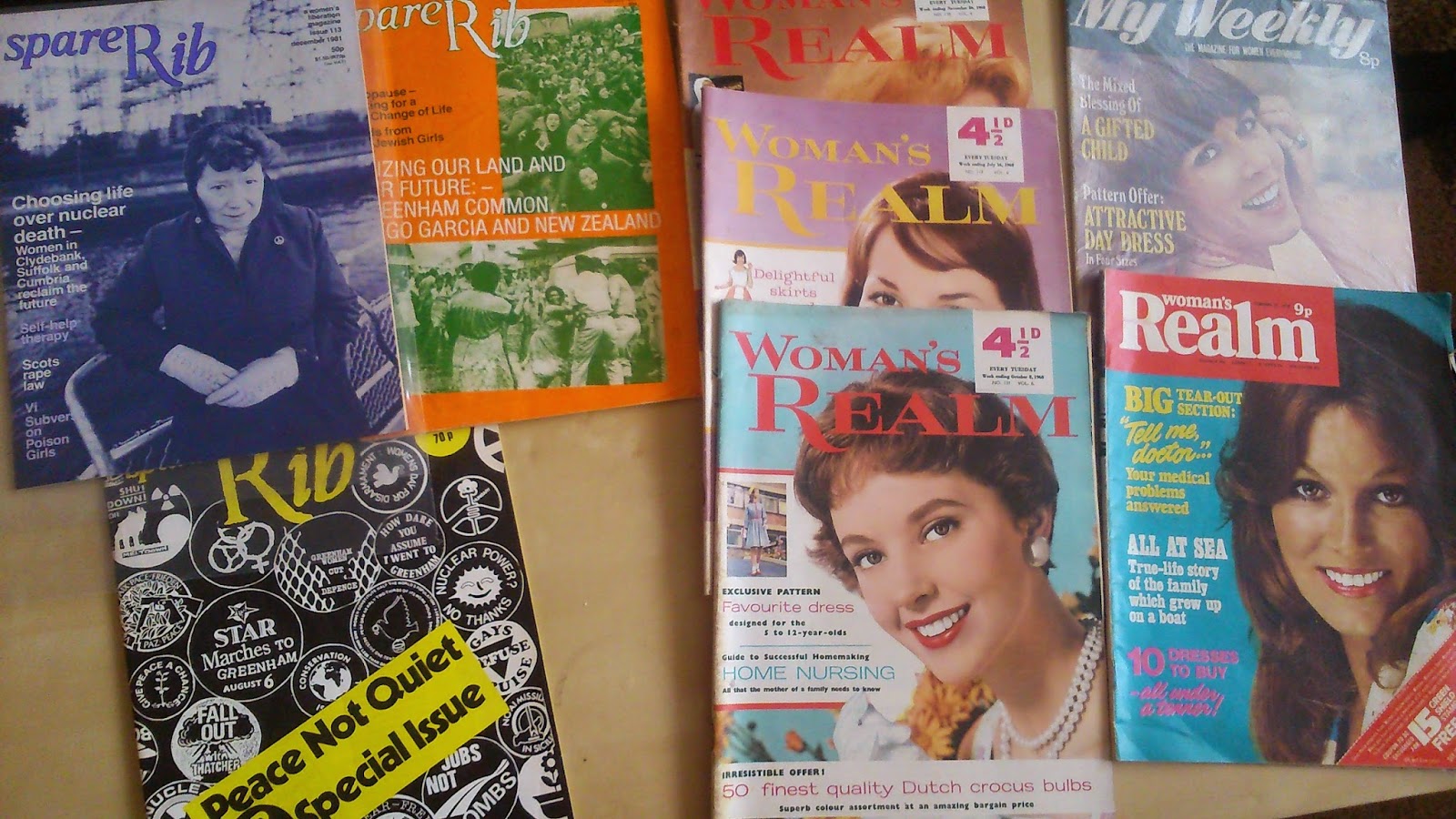 Saturday 12thJuly
Went to visit friends for the weekend and managed to do a little work on the train. Usually, I love working on trains because there are no distractions, but on this particular journey we had an extremely annoying train manager who:   welcomed us aboard and asked us to take a moment to read the safety information; reminded us that smoking was not permitted anywhere on the train (including the toilets and vestibules); listed the stops we would be calling at; told us the names of the on-board staff; informed us of the location of the buffet car (“carriage ‘C’ for Charlie, that’s carriage ‘C’ for Charlie…”), listing the items available from said buffet; warned us that if we had purchased "an advance ticket - that's an advance ticket..." that we should make sure we were on the correct train. In case we hadn't quite got that, she added, "If your ticket has the word advance printed on it, and you are not on the correct train, you will be required to pay the full fare." She announced all of this loudly, longly, and after every single sodding stop. Nevertheless, I managed to write the start of a new scene without turning it into a ‘train passenger murders train manager’ story. Word count: 422

Sunday 13th July
The return train journey was blissfully peaceful in comparison to the outward trip, but was considerably longer (travelling for almost 6 hours on three different trains). Tired, at a difficult stage in the novel and perhaps just a little hungover, I struggled to work properly, but managed to squeeze out 360 words which is, as they say here in Sheffield, better than nowt. Word count: 360

Monday 14th July
Frantically busy today catching up with everything that's fallen behind over the last few days, So lots of emails, lots of reading and annotating students work for short story class tomorrow, and a fair bit of household stuff. I need to be on top of things before heading off on a writing retreat on Wednesday. I've not written anything today, but did spend half an hour doing some editing. Word Count: 0

Nice things this week:
Audiobooks arrived! Haven't listened yet. I wonder what it'll be like to hear my own words read to me?

New Amazon reviews:
The Secrets We Left Behind: one 4-star, one 3-star
The Things We Never Said: one 5-star, two 4-star

Overview
It's been an incredibly busy week, and I've not done as much on the novel as I'd have liked, but I still made some progress, and have just about hit my modest target of 2000 words (wrote 2075). Total wordcount: 40,436 BUT I am about to cut a section that I absolutely know I won't use so, here goes...there! Total wordcount  now 37,945. Gutted.

The coming week:
Off on a writing retreat tomorrow until next Tuesday, so am hoping to make seriously good progress this week. There will fewer distractions, no babysitting, no cooking, no shopping! All that can hold me up is the novel itself. I'm at a difficult point, moving to a different character/time period and storyline. So far, I've not had much luck with this character. I'm hoping that by focusing closely on her over the next five days, I can make a breakthrough. This may involve simply writing and writing to try and 'uncover' the character and story. I've tried planning, and that hasn't worked, so I'm going to try just steaming in. On that basis, I'm going to set a more ambitious target of 10,000 words for this coming week! If I don't make it, I shall be honest about it, as I have promised to be right through these 10 weeks. Yikes!

Posted by Susan Elliot Wright at 13:04

Email ThisBlogThis!Share to TwitterShare to FacebookShare to Pinterest
Labels: fiction, first draft, novel, The Secrets We Left Behind, The Things We Never Said, We Are Called To Rise by Laura Mc Bride, writers retreat